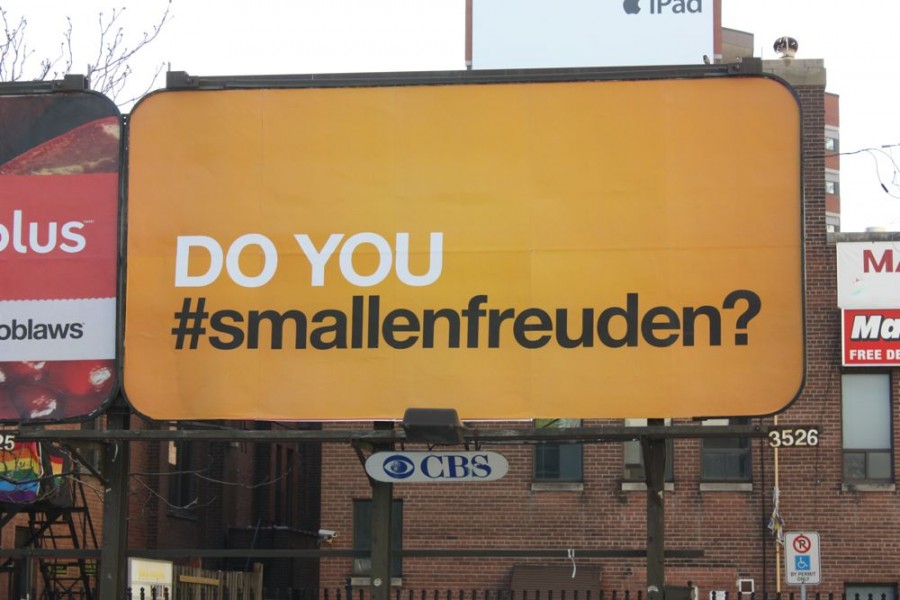 If you live in a major Canadian city, or more specifically, in downtown Toronto, you may have noticed the cryptic advertising of “Do you #smallenfreuden” across city billboards and even on YouTube. Well the cat is finally out of the bag.

VISA, alongside their agency BBDO Canada, announced Friday morning that they were the brainchild of the campaign, promoting small purchases using your VISA card. That would explain why the agency chose to use the hashtag “smallenfreuden”, which means in German “small joy”. Their campaign extends from billboards in high traffic areas to YouTube ads, television spots, and even a Twitter account with a shy amount of followers (when this post was written, they had 191 followers and followed 551). Nevertheless, from what I witnessed, the cryptic marketing campaign got many people talking, especially over social media, and falls in line with their current campaign on many commuter buses promoting their VISA Debit line. It seems that VISA is pushing the movement of using credit for purchases that you could easily use debit or cash for, and trying to erase the hesitation that were once attached to using a credit card for small purchases and its effect on your credit score. It took them around a week to announce who was behind the campaign, and I would have liked to see them keep it anonymous for a little bit longer, and see how big of a conversation they could have created. Nevertheless, their campaign is not finished, and it will be interesting to see where they take it from here. More from Marketing Magazine.